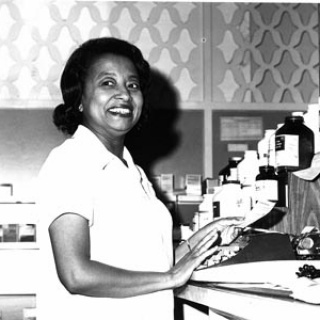 Like many institutions in our country, the worlds of health care and pharmacy were limited for Black Americans for decades. It was only through the relentless courage of a few who refused to accept the unfair status quo that things slowly began to change.

In celebration and recognition of Black History Month, Express Scripts® Pharmacy would like to honor a few of these trailblazers who broke barriers. They changed history and paved the road for generations of Black pharmacists, doctors, and nurses who came after them.

Barred from attending college in the United States due to the color of his skin, Smith crossed the ocean to become a student at Glasgow University in Scotland where he earned three degrees, including a doctorate in medicine. After a brief internship in Paris, Smith returned to America, where he opened a medical office and pharmacy at 55 West Broadway in New York City that served patients of all races.

He parlayed his reputation in the medical field into becoming a prominent abolitionist and activist. Smith called on his medical and scientific training to write papers and deliver powerful speeches pushing back on widely held stereotypes of the day, including the ideas that head shape and size dictated the intelligence of different racial groups and that emancipated Northern Blacks were more prone to crime and vice than their enslaved brethren.

Smith died in 1865 of congestive heart failure. Nineteen days later, the 13th Amendment to the U.S. Constitution was ratified, abolishing slavery. In 2018, 153 years later, the New York Academy of Medicine posthumously inducted Smith as a Fellow to the Academy. He had applied for membership in 1847.

The daughter of a slave, Anna Louise James didn’t just break barriers; she also shattered glass ceilings. Not only was she the first Black woman to graduate from the Brooklyn College of Pharmacy, but she was also one of the very first Black women to be a licensed pharmacist in the United States.

Interested in the natural sciences from a young age, James graduated high school in Connecticut in 1905 with the goal of becoming a pharmacist. Her ambitions took her to the Brooklyn College of Pharmacy in New York. After several years of study, she graduated in 1908, becoming the first African American woman to graduate from the revered institution.

She returned to Connecticut to work at her brother-in-law’s pharmacy, making her the first Black woman to be a licensed pharmacist in Connecticut, and one of the first in the entire country. When World War I broke out, her brother-in-law was called into action and transferred operations over to “Miss James,” as the local community called her, in 1917. She would run the pharmacy until 1967. Over those 50 years, James and her pharmacy gained a reputation for generosity, finding ways to get people their medication even if they couldn’t always pay.

Anna Louise James lived in the back of the pharmacy until her death in 1977 at the age of 91. Her story became an inspiration for other Black women driven to pursue a career in pharmacy in the decades to follow. In 1994, the James Pharmacy was listed on the National Register of Historic Places.

It’s tempting to think that all color barriers were crossed long ago. But the story of Mary Munson Runge is a good reminder that progress is always being fought for and won, even in more modern times. In 1979, Runge was elected president of the American Pharmacists Association — the first woman and the first African American to be named to the role, ending a 126-year run of white, male presidents.

Runge was born in 1928 on the fringes of the Louisiana delta to another pioneer. Her father was the town’s first black pharmacist. Following in her father’s footsteps, Runge graduated Xavier University of Louisiana College in 1948, before moving to California. She began her career as a hospital pharmacist, before transitioning to becoming a community pharmacist, helping poorer people obtain medication.

After being sworn in as president of the American Pharmacists Association, she worked tirelessly to advocate for the profession, including efforts to bring more women and minorities into its fold. After her two terms ended in 1981, she continued to practice while also serving on a variety of federal committees over the next two decades.

We are thankful for the contributions and sacrifices these and other Black pioneers have made over the years to make the pharmacy practice a more inclusive, diverse specialty. Only by having a multitude of backgrounds and perspectives on our team can we deliver equitable, individualized, and trustworthy care.