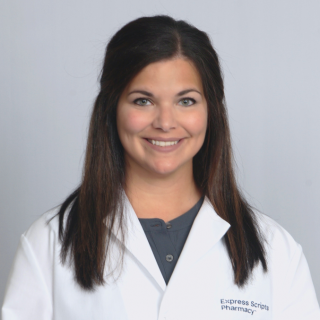 As a pharmacist in the Express Scripts® Pharmacy Clinical Programs Department since 2009, Anna Evans is often reaching out to patients who aren’t taking their medications as prescribed or who have other care concerns. When she noticed a woman was overdue filling five different prescriptions from multiple pharmacies, she knew it was critical for the two of them to connect.

The patient’s prescription list included two different diabetes medications, two for high blood pressure, and one antidepressant. And she was more than a month late filling all of them.

“She was missing doses of pretty much all her medications,” Evans said. “That became apparent when we spoke.”

So Evans immediately got to work, trying to understand what was causing the patient to miss doses, and then helping remove those barriers.

Getting to the bottom of it
The patient’s erratic schedule and poor sleeping habits made it difficult to take doses on time. She also didn’t see the benefits of her medication.

Evans asked her how she was feeling and the patient opened up to her about her personal and emotional struggles. That’s when Evans explained that with the type of antidepressant she was supposed to be taking, it typically takes four to six weeks of consistent daily use to really take effect.

“That was an “aha” moment for her,” Evans said. “She was like, ‘Why didn’t anyone ever tell me this before?’”

Creating a plan moving forward
The two spent more than 30 minutes chatting on the phone and coming up with a plan to help her take her medications as prescribed.

“There were no phones ringing or people waiting in line,” Evans said. “I gave her my undivided attention.”

To make things more convenient for the patient, Evans suggested she move all of her prescriptions to home delivery through Express Scripts® Pharmacy.

Evans also sent her a weekly pillbox so she could sort all of her medications for each day ahead of time.

“She said, ‘You took all this time to tell me things about my medicines that my doctor never even told me, and I’m just so grateful,”’ Evans said.

Evans is hopeful that things will turn around for the patient, and she said it’s stories like these that make her job so fulfilling.

“As a pharmacist, the information I know is of no use unless I share it with the people who need it the most,” Evans said.

Discover how we make it easier to manage your medications.